So yesterday I mentioned my camera upgrade, and today, I talk about a neat little attachment, who’s primary purpose is pretty cool, and secondary purpose is neat, but ultimately unnecessary (for me).

As you can see, it’s a grip that attaches to the bottom of the camera, suddenly making it look a lot more like Nikon’s professional line (for example, go search an image of the Nikon D5), makes it a fair bit heavier to carry around, but, as you can see from the title gallery, contains an extra battery. The D7000 has an option (menu item d-14) to choose which battery you want to draw from first: the grip battery or the camera’s own battery. Honestly, I have yet to find a reason for that. If you’re shooting with the grip on, why drain the camera’s battery first when that’s the harder of the two to swap out, and swapping grip batteries would thus not require completely turning the camera off to do so.

In contrast to other cameras like, yes, the D80, the MB-D11 grip attaches through an external connector on the camera itself, look just underneath the battery door, on the left: 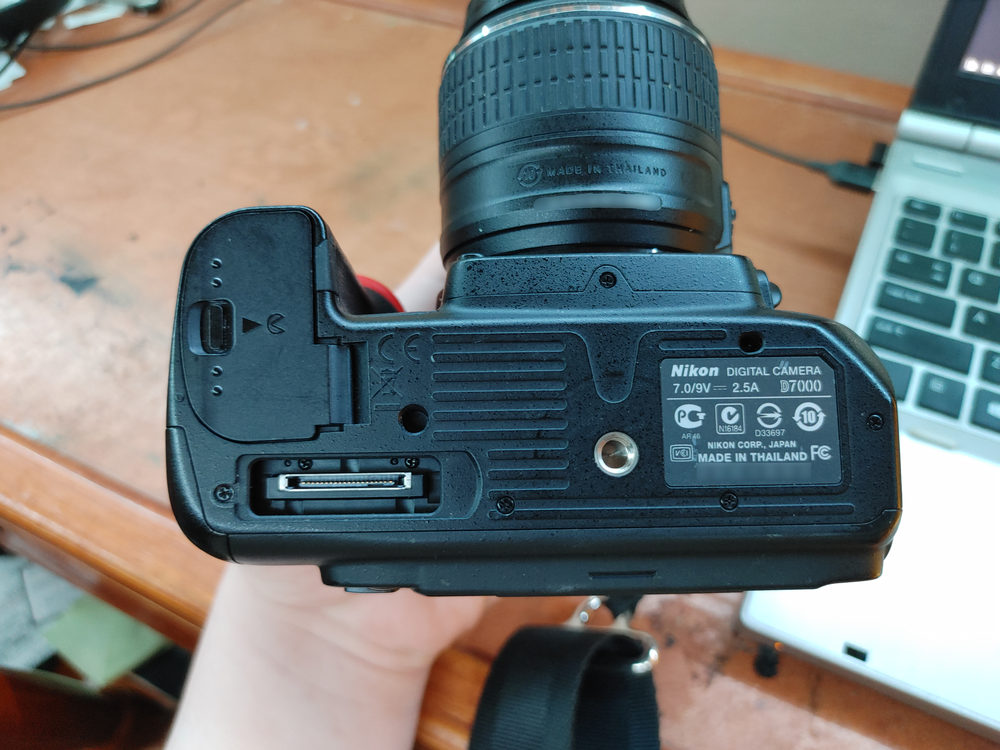 One little annoyance is that the piece of rubber used to cover this port when not in use is not tethered to the camera in any way, meaning that once you’ve pulled it off, you better keep track of it. Now, on other cameras, like the D80, the battery compartment, in addition to the battery contacts, also has an extra section of metal pads for a grip to make contact with, since they physically slide into the battery compartment, without requiring a separate connector like this one. With this design though, this means you’re getting an extra battery, instead of replacing the one that you already have. Even the camera can tell you that it’s got an extra: 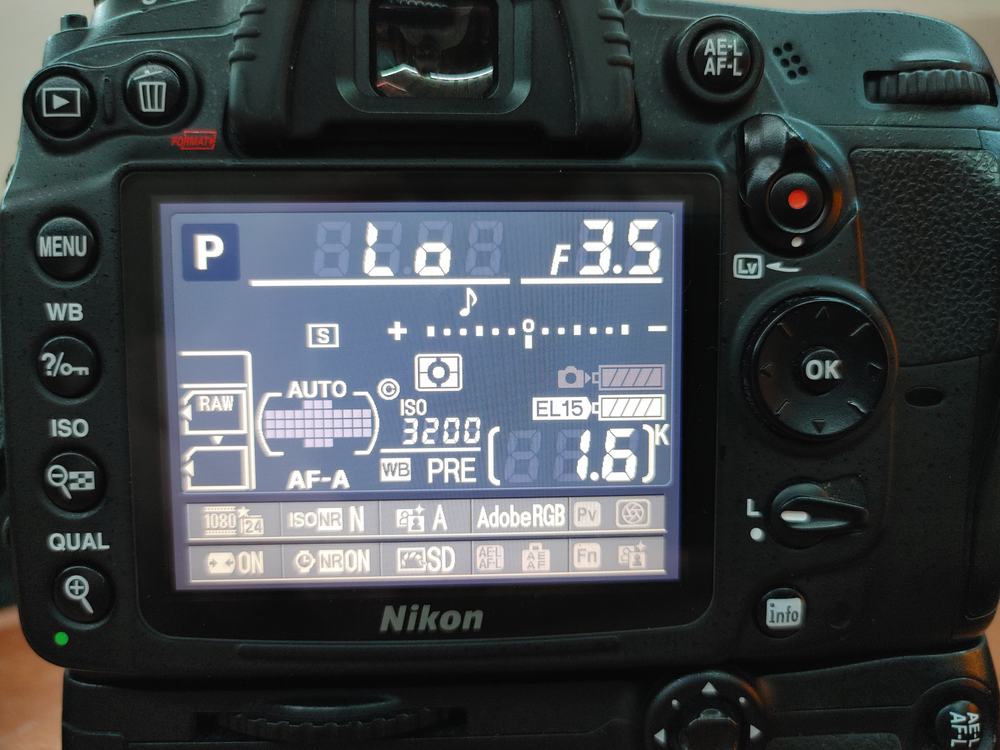 On the right side of the display, the battery gauge with a camera icon next to it is greyed out, and the battery icon with an “EL15” pointer is lit up — that one is the grip battery. It says “EL15” since there’s an EN-EL15 battery inside, which is what it usually takes. However if you have the additional little battery tray, you can instead cram 6 AA batteries in the thing, and it will still work. There’s a camera setting (d-13) for this, since you need to tell the camera if you’ve fed it with Alkaline (called “LR6”), NiMH (“HR6”), or Li-ion (“FR6”) batteries. I have one of these coming in soon, but don’t worry, I’m not making a separate post just to talk about that. Also, one final note on batteries: the EN-EL15 batteries are already huge (capacity-wise). The ones I’m using are extended capacity. Putting two of them means, well, last time I went shooting, for multiple hours, I only drained 10% off one. Meaning that with both batteries, you’ve likely got quite a bit of available power.

Anyways on a non-battery-related topic, you might have noticed that there’s some controls on the thing. The shutter, AE-L / AF-L, main- and sub-command dials, and even the little 8-way hat-like button all mirror their respective components. (That 8-way switch is the same as the directional pad with the “OK” button in the center, to the right of the display, on the main camera body.) The switch around the shutter button is an on/off switch, but not for the camera. When the two marks are aligned, the grip is “on” and the controls will be responsive. When the two aren’t aligned, it’s “off” and is nothing more than an extra battery. The large thumbwheel with the “LOCK ►” next to it is only used to rotate the little mounting screw there, to actually, well, lock it against the camera. You might be wondering why you’d have the exact same controls twice, but maybe seeing it from the front gives you a little hint — the entire grip is rotated 90° relative to the camera body, meaning that when holding it sideways for portrait aspect photography, you now have an easy to reach set of controls without bending your hand all the way over. Remember that the camera’s sensor is not a perfect square, it’s actually more of a 3:2 aspect ratio. In the normal (so-called “landscape”, if you’ve ever printed a document, you know what this is) orientation, it’s longer horizontally, and in “portrait” (rotated 90°), then it’s longer vertically. Again, since I don’t do much portrait photography, while it’s a neat option, it’s not the primary reason I have that. Obviously, that primary reason is more power.

A pretty simple attachment that I (obviously) got used (there’s some scuffs and such), and the combined total of this and the camera itself adds up to some… doing some quick math… really dumb levels of discount, I’m still kinda in disbelief at how I found these two things this cheap.