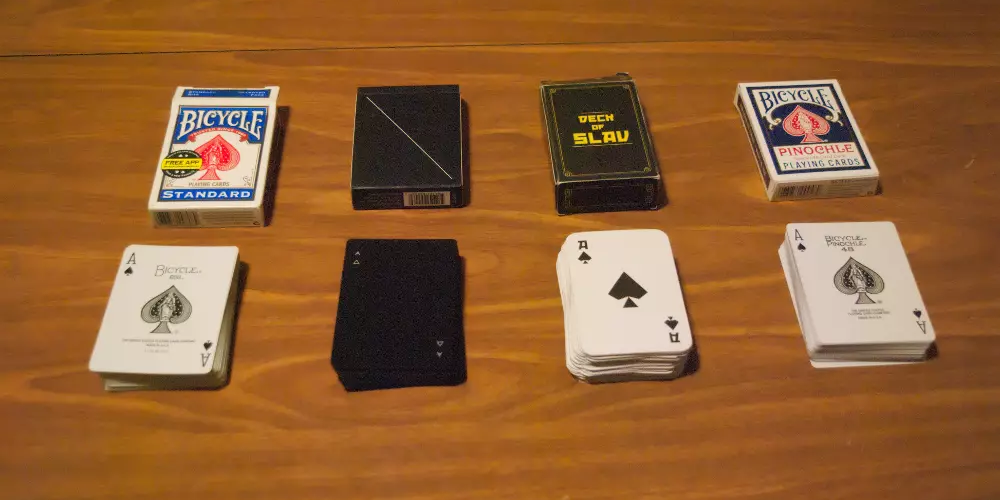 Me and My Cards

See, I’m a collector of many things… apparently playing cards are making that list rather quickly. You… will have to excuse my camera for this, it was definitely not a fan of the lighting I have.

I’m no Chris Ramsay, but that doesn’t mean I can’t appreciate a good deck of cards. Plus I like these and this is my site, so I’ll share. 😛

And this is just covering normal playing card decks, not some special ones… though there is one specific one that I’ll mention later. 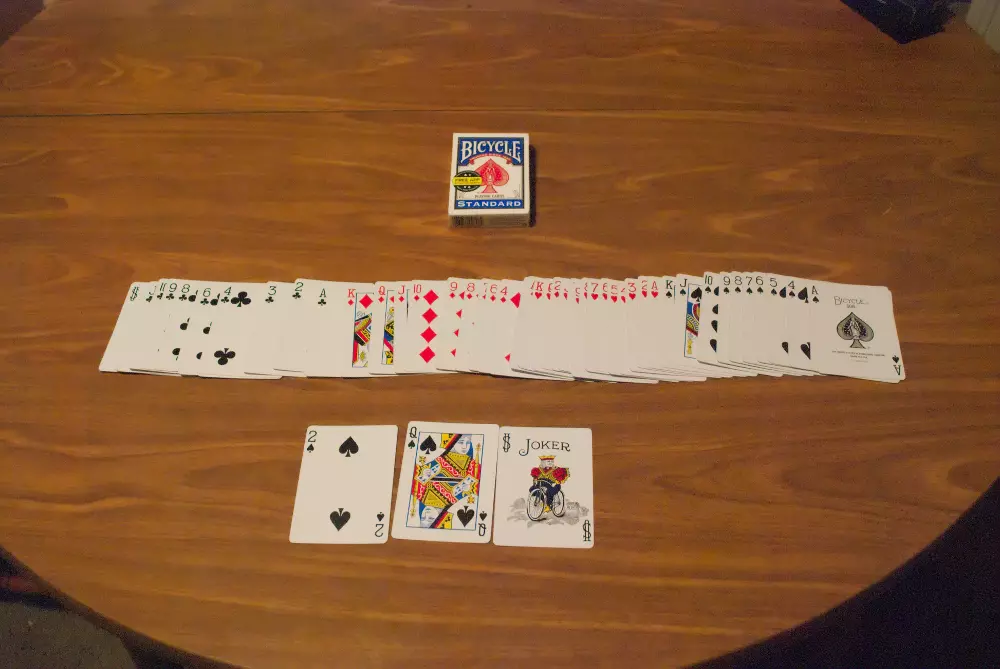 Ah yes, one of the most recognizable brands, Bicycle, part of the United States Playing Card Company. Nice, big, readable faces, perfectly white background, you know exactly what these are.

There’s not much to say about these.. so let’s more on to some special ones, shall we? 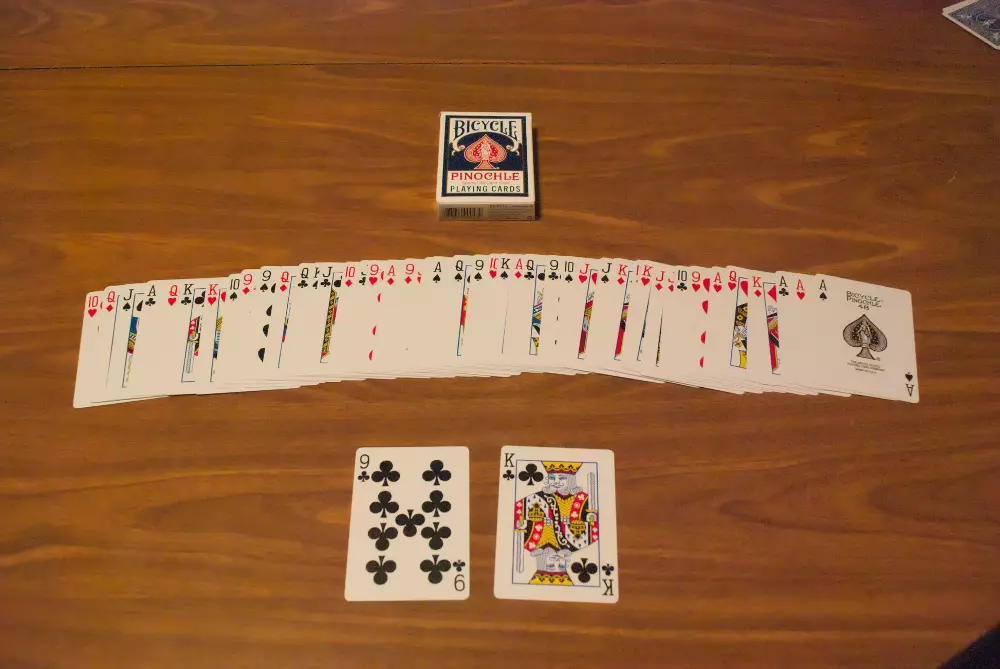 Yeah, this one is strange. Meant entirely for playing pinochle, it’s a 48 card deck consisting of two copies of 9, 10, jack, queen, king, and ace, in every suit.

I have exactly no clue what they’re thinking and I’m still just trying to wrap my head around it all, but at least once I do I can have bragging rights by knowing a game that nobody else can even understand how to play? I really only have this just because it makes friends seriously question the game without knowing anything about it other than the deck.

One other note: these cards almost float on top of each other, the lack of friction that they have is really surprising. 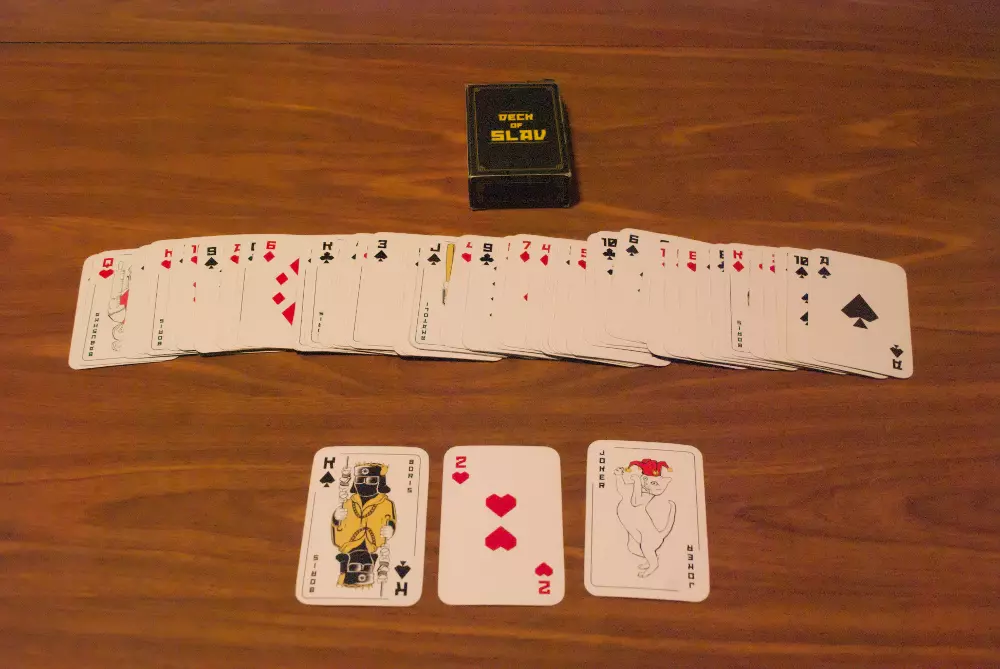 Yes, one just had to be YouTuber merch. Made by Boris (of Life of Boris), the Deck of Slav is the perfect thing for playing a game of Kalashnikov, or struggling to shuffle correctly. Unlike bicycle cards, these are basic cardboard. They tend to clump together and lack a little in the durability department, but I don’t expect merch to compare to one of the most recognizable card brands in the US.

On a positive note, they definitely have a very unique style, but it doesn’t compromise on readability at all. 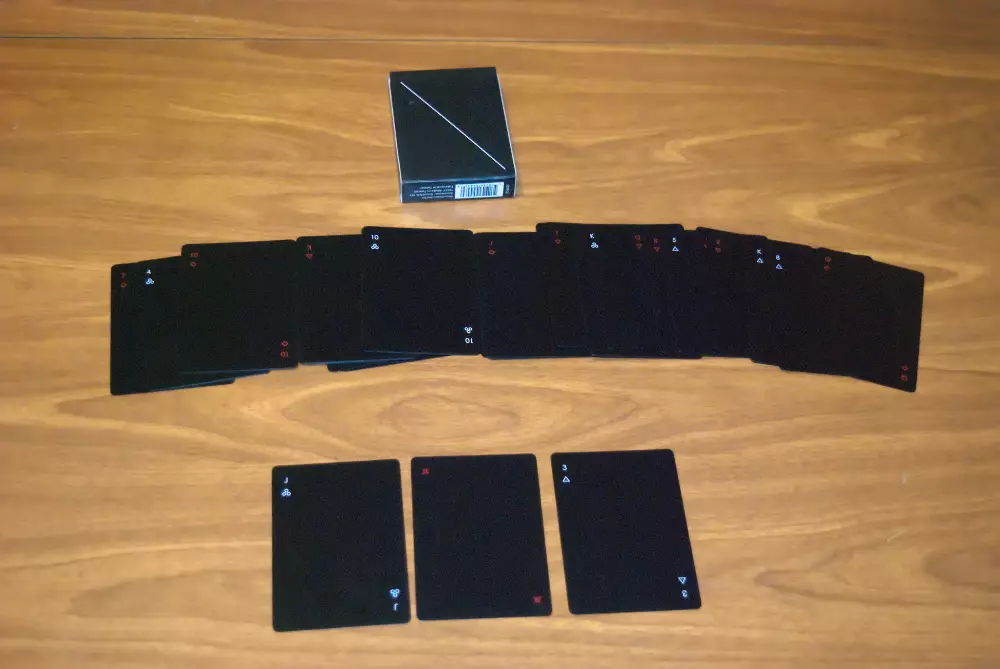 Hey, the only one that needed insanely high ISO and a flash!

The minim deck is very, well, minimal. And minimalist is one of my favorite designs.

The cards are 100% sheet plastic making them very flexible and tear resistant, though they’re also easy to crease and fold. They only contain a singular pip and rank in the corner, and… that’s it. Turns out, black cards are really hard to read, and red print on black is even worse. I can’t say they’re they easiest to use, or that they’re easy to shuffle, pure plastic is even more resistant to separating than plain cardboard. You can see how badly they wanted to clump together up there, to the point where I basically got it good enough to take a picture of and just gave up.

They’re fun to look at, and show off, but quickly fall in practicality unless you’re in almost direct lighting. Too direct though and you can’t see the cards through the glare. And I do indeed hope that you don’t mind seeing scratches on your new cards because smooth plastic surfaces tend to show their wear easily.