So Many Different Ink Types

Disclaimer: I only have photos for some of these, and that’s because those are the ones that I own.

So, back at it again with fountain pens. For most people, ink is ink. For us, well it’s much more advanced than that. Let’s take a look at some of the different ones: sheening, shimmering, iron gall, you name it. 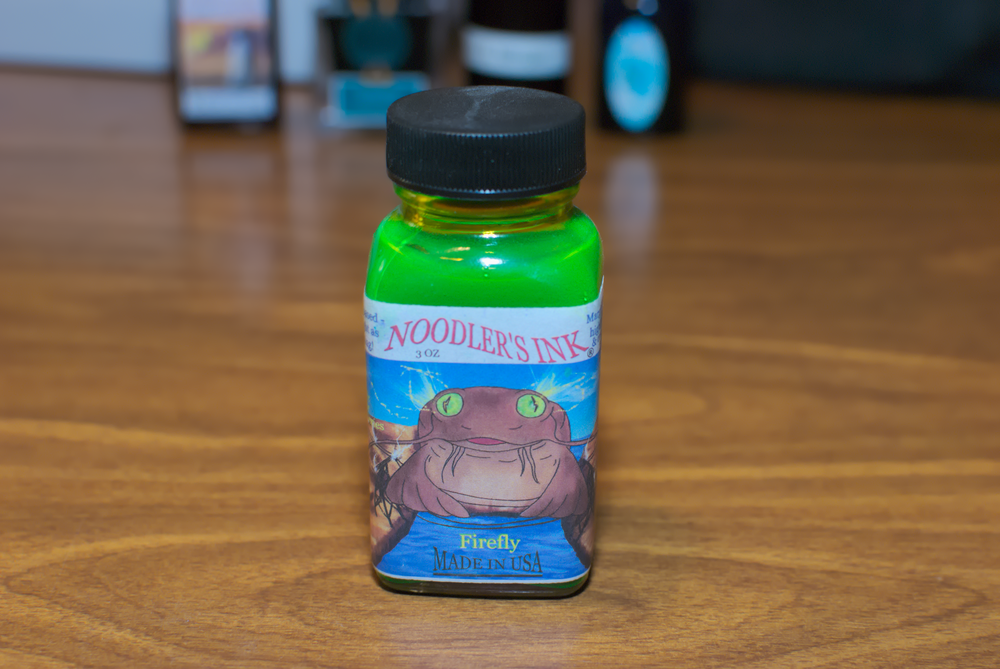 Fluorescent inks… well, if you want an example, think of the extremely bright color of a highlighter — that’s fluorescent ink. This also means that they’re usually UV reactive, which is cool. The bottle there is of an ink called Firefly, which is literally just highlighter ink. It’s a deep yellow-orange when light shines through it, but becomes that yellow-green color when light reflects off of it.

Some inks from that particular company (Noodler’s), like Blue Ghost, are clear. They’re literally invisible inks that only show up under UV light. Do please live out your teenage dreams of being a spy and passing around invisible messages that only the right person can read.

Iron gall ink penetrates deep, meaning it’s harder to erase, and it’s exact composition means that it’s usually not water-soluble. When exposed to air it darkens, meaning that it gets darker a little bit after you write with it. The downside is that, besides just being an old formula, it’s actually acidic, and can damage pens if left in too long. And as with most chemical reactions, certain metals and acids most certainly do not mix well. Not to mention that it can also eat through the paper you’re writing on if you’re not careful enough.

This is why modern iron gall inks use a less harsh mixture, though it’s also not completely neutral. They usually only come in dark colors, like blue-black, lavender, or just plain black.

So what’s the practical upside today? Well when you need a guaranteed permanent ink, it can’t be beat. In the UK, register offices use iron gall ink for official documents, the unique formulation of which is not only hard to fake, but also makes it hard to forge documents by either chemically bleaching or physically removing the ink.

In other words: Unless you need to write something that will stay with you forever and it worth the potential pen damage, don’t,

Lubricated inks have, well, lubricant. While this does help them flow a little better and makes for a smoother feel on paper, the main use is in pens with a piston filling mechanism, to lubricate that mechanism with your ink instead of having to re-grease it every time you disassemble it for cleaning. (greasing your pistons usually does not need to be performed that frequently).

There’s not much to say, it’s a pretty straightforward concept.

Most inks use a dye that’s likely in a fluid carrier, meaning the ink itself is 100% liquid with no solids. Pigmented inks has solids in them, which is the actual pigment powder. Pigmented inks tend to have a stronger or darker color, if that’s what your going for, but the actual physical particles of solid can clog a pen, especially if left to sit for a while, and even more on finer nib and just plain smaller pens with less room for ink to flow through. 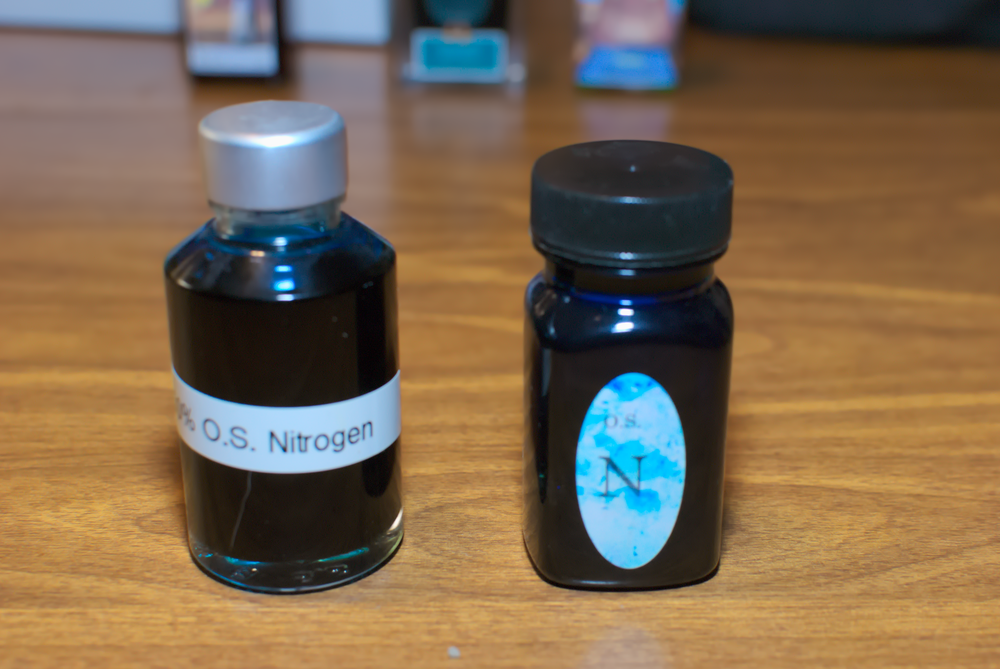 I know it’s really hard to show in a picture of just the bottle, but sheening inks are my favorite. Sheening inks are inks that have a reflective, metallic-looking or color changing luster on the surface once dried. Organics Studio, for example, makes some insanely sheen-heavy inks. Nitrogen, that one you can see there, is technically a royal blue ink. When you look at it in the bottle, it’s blue. But when you write with it and a little pools up, it turns a bright reflective red. That is cool… there’s just one problem.

High sheenings inks, especially Nitrogen over there, will get everywhere and stain anything they touch if you’re not careful. I use my ink 50% dilute and the results are identical, if that’s an indication of how concentrated they are. Nitrogen especially doesn’t ever really dry, and will always smear on something. Coming back to a months-old notebook and running your finger across the page, the oils and moisture from your finger are enough to set it off and give you blue fingertips. (Side note: don’t do Nitrogen filling or cleaning in the bathroom sink. Next time you take a shower that steams up the room you’ll see blue specks everywhere.) 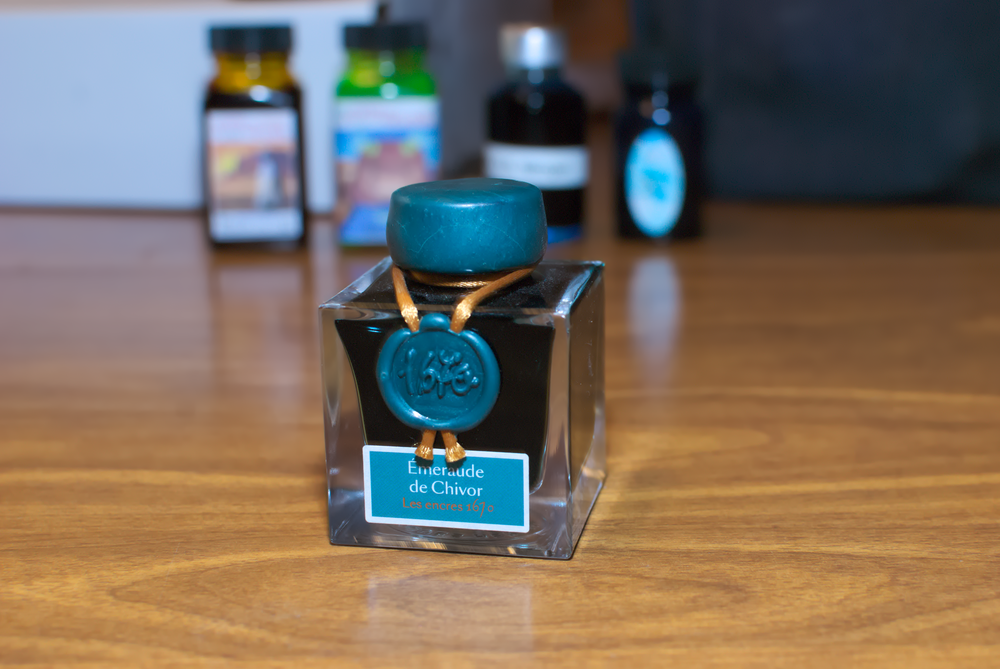 You see that stuff? Remember the section above on pigmented inks? Shimmering inks have little reflective metallic particles in the ink, so that when you write, you get little reflective bits in your writing, as well as the color of the ink itself. J. Herbin Emerald of Chivor ink is blue-green, but has yellow flecks, which when in the ink produces a bright, and dare I say it, emerald green sparkle and shimmer to your writing.

The particulate does tend to settle, meaning you’ll need to shake the bottle before filling, and )gently) give your pen a little rock before you write to keep it in suspension instead of settling to the bottom. And yes, particles does mean that it has a higher tendency to clog, but the trade off is the beautiful color and end result.

Side note for those that see the file name: That one autocorrect mistake has since become a running joke, especially on the Goulet Pens website, where they even have stickers for it.