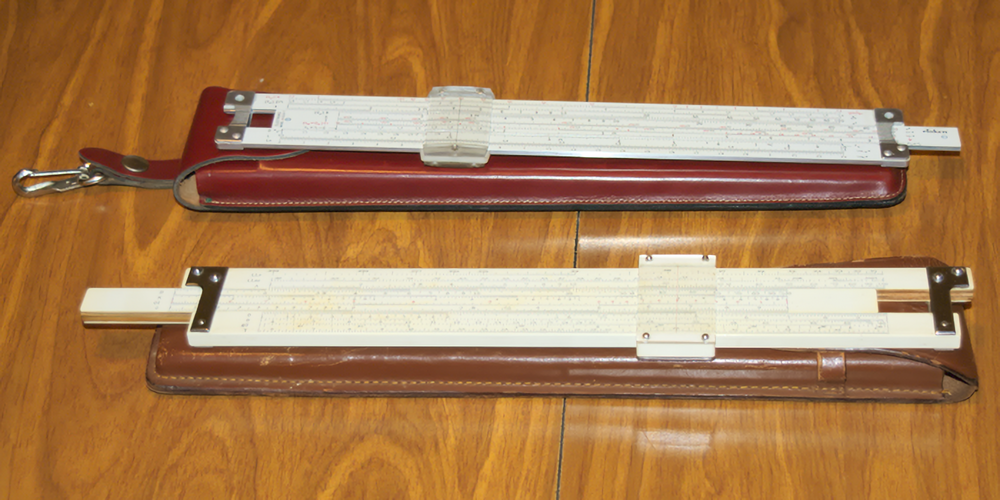 I’m deliberately ignoring the question of why would someone buy one of these things in 2020, and more on just how cool they are if you’re a nerd like me, once you learn the science behind it.

A slide rule is, well, the calculator that existed before calculators. These are the things that put man on the moon. Slide rules are capable of multiplication, division, exponentiation, roots, logarithms, and some trigonometry. They also have two major advantages compared to a calculator: no batteries to die, and unlike electronics, do not die when introduced to water.

A slightly more subjective benefit: you’re actually interacting with something, moving pieces around, having a physical representation of the calculation laid out in front of you, as compared to just pushing some buttons and having the result magically just appear, ready to be used.

A downside though: don’t drop it. If you bang the scales out of alignment, that’s literally throwing your numbers off, even something like the difference of a thickness of a sheet of paper can influence your results. Now both mine can be unscrewed and readjusted (on one side, the other is riveted), until the screws in one actually just failed, the metal was too soft. So I went all out and super-glued it in place. It looks a little odd but it does do the job.

They’ve… also been obsolete since 1974. And believe it or not, you can find one for like $30 on eBay, they’re actually not that rare or expensive, which is surprising for old tech. Then again, they’re objectively obsolete, as compared to something like old typewriters which still do have a purpose to serve.. sometimes.

The Math Behind It

All the markings you can (kinda) see on those are logarithmic scales with different parameters. I’m not going to give a full tutorial on how to use one here, but the thing about logarithmic scales is what when you put two identical ones next to each other and offset their position, they can actually become a multiplication table… math:

Of course they have more than just two scales, there’s actually 22 different defined ones, and about 8-ish per one side, the bottom one in that picture is double-sided.

That math was for basic usage, either the A and B or C and D scale pair. Here’s a full table of all of them (from Wikipedia):

Because I’m weird and eccentric and like having something like that in my possession just because. I also passed my high school algebra class with this instead of the given TI-84 calculators, and it annoyed the teacher so much because he didn’t know how to use one… fun times. That was also the same teacher that saw me getting 100s on every test and let me just use the Photomath app on all the worksheets (take a picture of a problem and it’ll compute the solution for you). I like math, okay?

The other why: I can now say that I can do large multiplication and long division problems without a calculator, and it usually gets people twice: once when I pull out the slide rule (“You said you could do it in your head!” “No, I said I could do it without a calculator.”), and the second time when I get something that’s usually only one or two (literally) off from the real answer. Or I could just… hand it to someone and ask them how to work it.