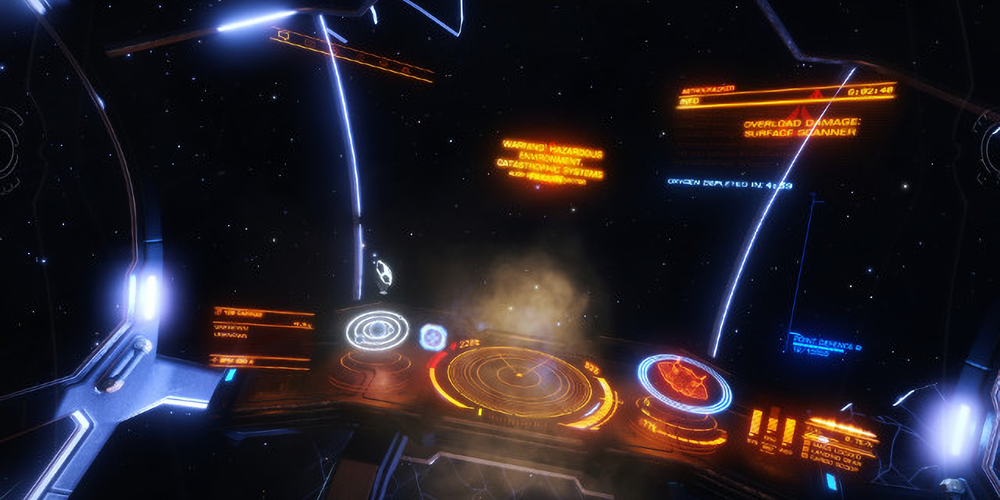 If you know Elite Dangerous, that picture and title tells you everything you probably need to know. If not, well, let me put it this way: Even found yourself in a game where it puts you in a literally impossible and unwinnable situation? Well that’s what happened.

For those who don’t know Elite: Dangerous, I’ll explain. For those that do, just skip the sections.

Like… really quick. Elite: Dangerous is, in my opinion, one of the best open-world online space exploration and simulation games out there. I really cannot do it justice explaining, go look up some on YouTube (shameless plug for my channel).

The Frame Shift Drive, or FSD, is this particular game’s explanation for how we have faster than light travel. All you really need to know for this is that they have a maximum range, say, for example 30ly. You cannot travel more than 30ly at once because of this, you’d have to make a stop midway through.

Traveling from one star system to another is known as an “FSD Jump”, “Hyperspace Jump”, or just a jump.

There’s also two modes of flight, one where the FSD is not engaged, and you’re under normal power, and the other where the FSD is engaged, allowing you to fly at superluminal speeds, not just instantly teleport. This flight mode is known as “Supercruise”

Ships are very complex things with many parts that can be independently affected, used, damaged, and so forth. One of the most important parts is the “canopy”, which is literally the cockpit glass in front of you. If this gets damaged to the point where it shatters, you’re suddenly on an emergency oxygen countdown until you can get back to a station to dock and repair.

Ships can only survive certain temperatures, if they get too hot they can start to fail. First components fail, but too hot and the entire thing can and will literally just explode.

Almost all stellar bodies have an “Exclusion zone” around them. If you’re traveling in Supercruise and fly into this zone, you immediately drop back to normal flight, and take some damage, also incurring a 40 second long cooldown before you can enter again.

If you have been dropped by an EZ, you will need to point the ship in a certain direction before Supercruise can engage again. This point you have to aim at is known as the “Escape Vector”

And now the most complex part: Two types of stars (neutron stars and white dwarf stars) emit giant cones of charged particles. If you fly into one in Supercruise and stay there for a few seconds, it will boost your FSD jump range. unfortunately, you can sustain damage staying for too long, and the stream of particles will fight you for control of the ship, and fight hard.

One note, White Dwarf stars have extremely small cones, huge exclusion zones, and don’t give that big of an FSD range boost, unlike neutron stars.

I needed just a little more range to jump home, which meant I had to take four white dwarf boosts in a row. usually not a problem… except this time. On the fourth boost, the particle stream actually dragged the ship into the exclusion zone of the star. So besides having to wait for 40 seconds to escape, I’m constantly being dragged around, overheating, and taking damage in addition to heat damage. The force is pulling the ship to point directly towards the star, and the escape vector is directly away from the star, in the complete opposite direction. Well, I literally could not rotate the ship into position, it was pulling too much.

Looking into that screenshot, the canopy has shattered, and in this ship I only have 5 minutes of emergency oxygen, heat levels are maxed out meaning maximum damage, the panel on the top right is just a constant list of failures scrolling by, and yes I know this is a hazardous environment, what gave you the idea of that? If you look close, you can even see some small text in the center reading “Align ship with escape vector” as if that’s possible right now.

Literally unwinnable. Luckily the rebuy cost for everything wasn’t too high, but… thanks game, really helpful today, aren’t you?